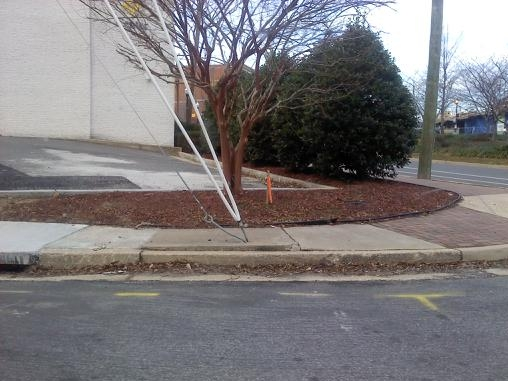 Thanks to the Lee hwy undergrounding, we have 2 poles blocking the sidewalk on N Lincoln St, Utility Boots further narrowing the walks, and a guidewire on the corner, pulling up the sidewalk. Fred Parry of Dominion Power confirms – “The two anchors and guy wires with white guy guards on them belong to DVP and is safe and secure. These anchors are part of the undergrounding project. The other loose anchor belong to either Verizon or Comcast. ”

As early as February the (24) 2-bedroom units at the Bromptons condos could be occupied as well as the moderate sized retail space below. Parking will be tight. There are 27 residential parking spaces (24 units + only 3 for visitors). The retail was deliberately under-parked by the County which adopted “revitalization” regulations halving the parking requirements for the Lee Hwy/Cherrydale area. Already N Pollard Street is around 80% fully parked on many if not most days. Parking therefore is likely to be tight once this building is occupied.

The street-parking plan includes 6 metered on Oakland St west-side, 5 meters on Lee, and 14 unmetered on Pollard. East-side parking remains the same on Oakland. Pollard St needs a certain number of spaces reserved for fire fighters. The County will likely review the parking meter concept when the Brompton condos open, as with Pollard St already heavily parked it might need meters as well, at least during the day. This street parking was counted on to make up for underserved retail.

Swiftly on the heels of the 2003 County approval of the “Bromptons at Cherrydale” site plan the CCA voted unanimously to “request that the County Board amend the terms of the Lee Highway/Cherrydale Revitalization District to the effect of denying any developer of any proposed future development in this Lee Highway/Cherrydale Revitalization District any “special exception” rights or special zoning rules to provide fewer parking spaces for such development than allowed by-right in the County for such development….” Experience has shown that successful Cherrydale retail must have easy access to parking. The exemption is Dunkin Donuts, a fast food spot that flourishes via short drop-in visits, just about doubling traffic on N Monroe St much to resident consternation.

Complicating the anticipated parking problem on N Pollard St. is its’ narrowed egress by Lee Hwy, where a phone pole sticks 12.5 feet into Pollard St. In 2008 just as we finally got County to make Ed Peete move the chain link fence away from the old sidewalk on Lee, VDOT contractors added a handicap ramp narrowing Pollard Street by an additional 3 feet. At the deepest “pinch” Pollard is now only 19.2 feet wide, even encroaching 6 inches into the “sidewalk” by the firehouse. The nonconforming sidewalk at that spot is only 39 inches wide. It lacks curb and gutter, and provides no defense from cars, which frequently run over part of the walk when turning onto Pollard from Lee heading southeast. (See Photo)

Already it is challenging for 2 small cars to pass each other, one waiting to exit onto Lee Hwy and the other to enter Pollard. But for 2 SUVs or trucks it is almost impossible and certainly even dangerous if there are also pedestrians on the Pollard sidewalk. (See photos.) County plans to remove the handicap ramp but that will add only 3 feet, and after all, no car wants to ride just 2 feet from a pole in order to navigate a turn so removal of the ramp helps only a little. Note though that we have asked for this action for 2 years already.

The stunning frustration in all this is the sheer number of times County ignored our protestations about the narrowing of Pollard St until now and the dozens of inquiries made about the entire Lee Hwy utility under-grounding process. In November 2004 County Engineer Robert Froh informed us, “The under-grounding of overhead utilities on the south side of Lee Hwy from Oakland to I-66 is in progress” and estimated completion in 6 months! “The County will perform … service connections while Dominion builds the new electric facilities necessary to “energize” the new underground electric facility. The Dominion work includes work such as installing pad-mounted switches and transformers and connections to the main electric lines.”

The switches discussed are the controversial ones placed at the entrance to BONO films, on the downhill a few feet from sidewalk. Here the county insisted on placing the large switches, now mounted on a raised platform, where (3) 4×5 foot boxes will loom over pedestrians just where the bike path meets Lee Hwy. This is the site Cherrydale had chosen for several shade trees for this long hot treeless block. Bono films owner spent 8,000$ in legal fees defending his property. The CCA asked County to move the switches back 8-10 feet, still on VDOT land but County engineers refused giving varying estimates of cost for moving. (See photo).

Under-grounding was planned by the County as early as the 1994 Lee Hwy/Cherrydale Revitalization Plan. The earliest emails I can find about any action taken would be 2003. We’ve had numerous promises of near completion, including Mr. Froh’s above in 2004, and last year by County Chief Engineer Luis Aroya (August 10, 2009), “DES is currently working on finalizing the design plans for under-grounding the utilities along Lee Highway. Dominion Virginia Power and Verizon are actively working with the County to resolve the final design issues that should enable the project to move forward sometime in the spring of 2010.” Well apparently that wasn’t exactly accurate. In fact it was only this past summer that engineers reopened the files and started once again working on the plan. They resumed in part because the CCA ratcheted up the inquiries.

What has County done with all the extra time it had to resolve planning issues so that the under-grounding would occur before occupancy of the condos? It’s a mystery. We do know that as a result of the under-grounding “process” we have a hundred pound loop of cable tied to a phone pole on N Lincoln St, which often leans into the sidewalk. (See photo). We have a NEW phone pole actually blocking the center of the sidewalk just 30 ft up, set in place despite 2-3 years of CCA objections. (See Photo). We have lost well over 30 trees (half the sites along Lee Hwy have been replanted twice already, killed due to combination of construction, salt and lack of maintenance). We’ve sent countless requests for better monitoring of construction mess.

Lee Highway is a rundown sorry mess with few exceptions. Ten years of intermittent ineffective stop-and-start construction has provided us with a perfect example of the broken window theory. Allow a mess, an air of neglect and it sets an example for businesses and even pedestrians to not care about their surroundings. But worse, it allows the County to think about Lee Hwy and Cherrydale as unimportant afterthoughts to development elsewhere. County is responsible for planning and supervising construction along Lee Hwy and it has done a pitiable job.
View This Website's Stats